When our family comes together my nephews and I play games, sometimes my brother and his wife join – things get more or less competitive. We all like to play. We all like to win. And we all have our favorite games (usually the ones we win more often). And every couple of matches there is a swap as we have a big library of titles to chose from.
But some games make it into our round and they stay on for hours. These are the rare exceptional games. Games like Speedrunner.

One of the secrets of a good multiplayer game is giving everyone a chance while maintaining the idea of the better player winning most games. And Speedrunner has mastered the approach in a way that is genius.
Most racing games apply a technique called “rubberband” where the farther behind a player is, the more he gets a speedboost. This always feels a bit unfair and Speedrunner has nothing of that. Instead everyone plays on the same screen and being the fastest comes at the price of seeing the least bit of the level ahead. So your knowledge of the level might be better, but that is only of limited use if you don’t really see where you are going and have to time jumps over boxes more or less blind.

And jumping over boxes is not all you do. You swing like Spiderman, you double jump wide gaps, you wall jump, you land on accelerator patches, you move over switches to change the level layout – you do a lot of stuff and you sometimes have more than one option to move through the level. Some more riskier and more rewarding, some safer and a just a tiny bit slower.
So seeing where you are is worth a lot and keeping the lead in this runner is not as easy as one might think. 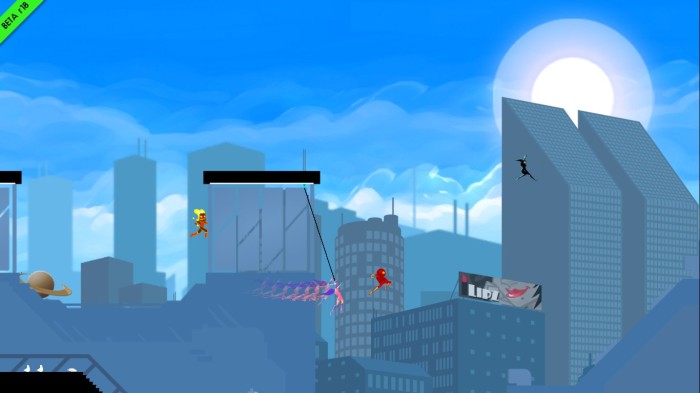 But being on the other end and trailing does not only come with advantages either! Having full level vision is incredibly helpful, not to mention the one or other obstacle might have already been removed by your fellow racers. And yes – most switches lead to the level changing in your favor, but not all. Especially not when you hope to make up for lost ground by taking a short cut that is closed right in front of your eyes.
And you know that if you make a mistake and are pushed out of the screen it will be your end. The dogs always bit the last one. 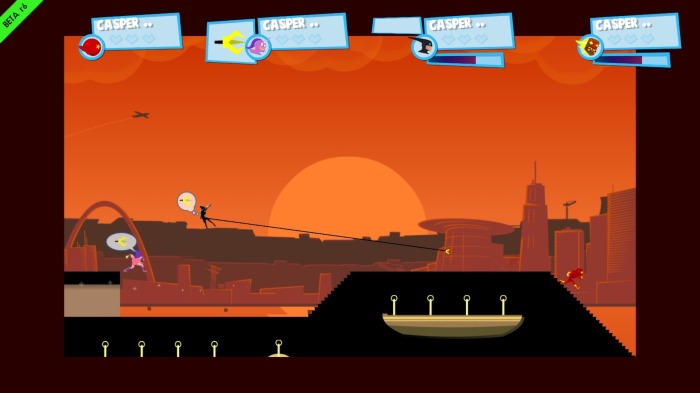 And once the first player suffers this terrible fate the screen starts to shrink until there is just a tiny little bubble left in which the slightest mistake usually means the end of the game.
This is a very smart mechanism that leads to nobody having to wait for too long. Because this is a fast game where constantly someone messes up and someelse gets the spoils. So prepare to win a lot and to lose a lot more. Even if you are the best player in the group your failure is a certainty.

Especially because there are a lot of nice tools to be found in surprise boxes! And in typical Mariokart manner you only get to pick up one until you used it. So it often is a decision to keep the little cool one or use them fast to have access to more.
The selection of tools is small but good – making it accessible to fresh players as well. There are the obvious ones like a guided missile or boxes you leave behind as well as those requiring a bit more finesse for best effect like the remote triggered bomb or the grapling hook to switch positions with a leading player … if all goes well.

And if there is a gamer that really leads the pack because (s)he knows all the levels by heart and can close the eyes and still navigate with perfect timings – then there are 10k or so user created levels to play instead of the orginals.
To be fair – we have had a very balanced play time and nobody had an unfair advantage at this point, so we never went into exploring that wide range of user created levels. YET! 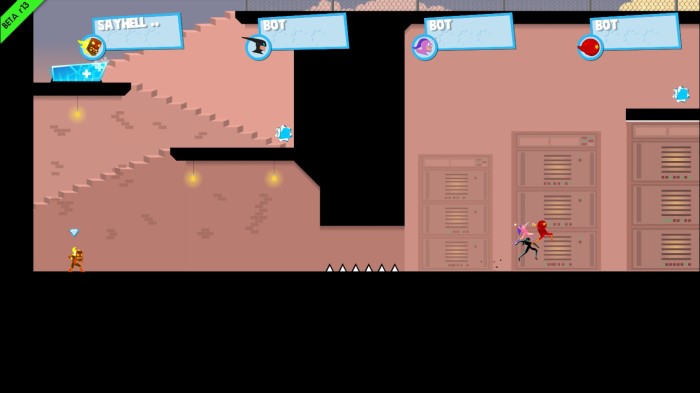 Final verdict on this game is “MUST PLAY!” for every local multiplayer group that likes competitive sessions. Hours will turn into perceived minutes. Planned movie sessions after the gaming get delayed to the point where they no longer happen in favor of being a giant Chicken doing the Spiderman thing. 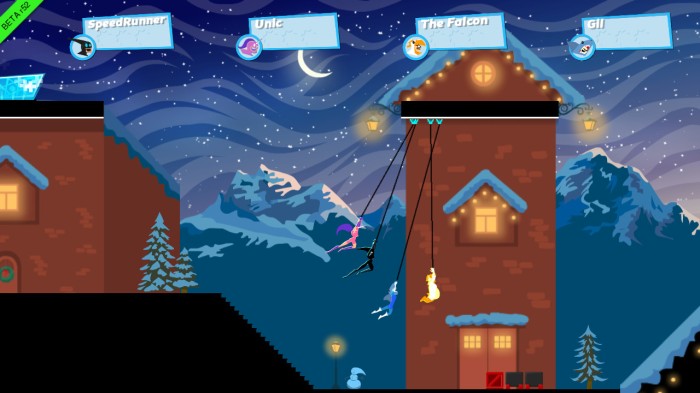